Sticky plastics on the Ferrari

A selection of sticky plastic parts from a Ferrari F355, which a despairing owner sent to us for treatment.

The same plastic parts after we had treated and restored them:

Besides the Ferrari 348 and Ferrari 355, the Ferrari 360 also exhibits sticky surfaces with increasing age. Again, in this case, the surfaces can no longer be cleaned. Everything sticks and disintegrates into a black tar of similar consistency. The vehicle can no longer be used without getting your fingers filthy. The fun of driving is somewhat different!

348 and 355, now joined by the 360, all exhibit changes to the plastic surfaces sooner or later. The indications differ: sometimes sticky, sometimes there are air bubbles under the surface finish, sometimes the surface disintegrates completely into a black mush.

Vehicles that have been exposed to the sun a lot or those that have been in the shade, but nonetheless exposed to high temperatures, are subjected to a faster process. However, once the destruction process has begun, it can no longer be halted!

Please – under no circumstances - soak your plastic parts with any plastic cleaners! This can result in bonding problems with the new finish, as silicones have penetrated deep into the plastic material. Unfortunately, Ferrari parts that have been subjected to experiments are reaching us again and again. As plastic parts or even switches have been immersed completely in a diluting solution or over-moulded with some dyes containing solvents, to salvage these parts is very difficult and sometimes impossible. Dilution removes all remaining softeners from the plastic and makes it brittle and fragile. Even using solvent lacquers in plastics that are not resistant to the same leads to their destruction.

As the number of spare parts for older Ferraris is constantly falling, please do not experiment with the original parts! The time will come, as it has already with the Ferrari 360, and will soon be the case with the 348 and 355 versions, there will be no more parts on the market!

Here you see the result of our treatment: a perfect restoration of the plastic parts of a Ferrari 360, true to the original. 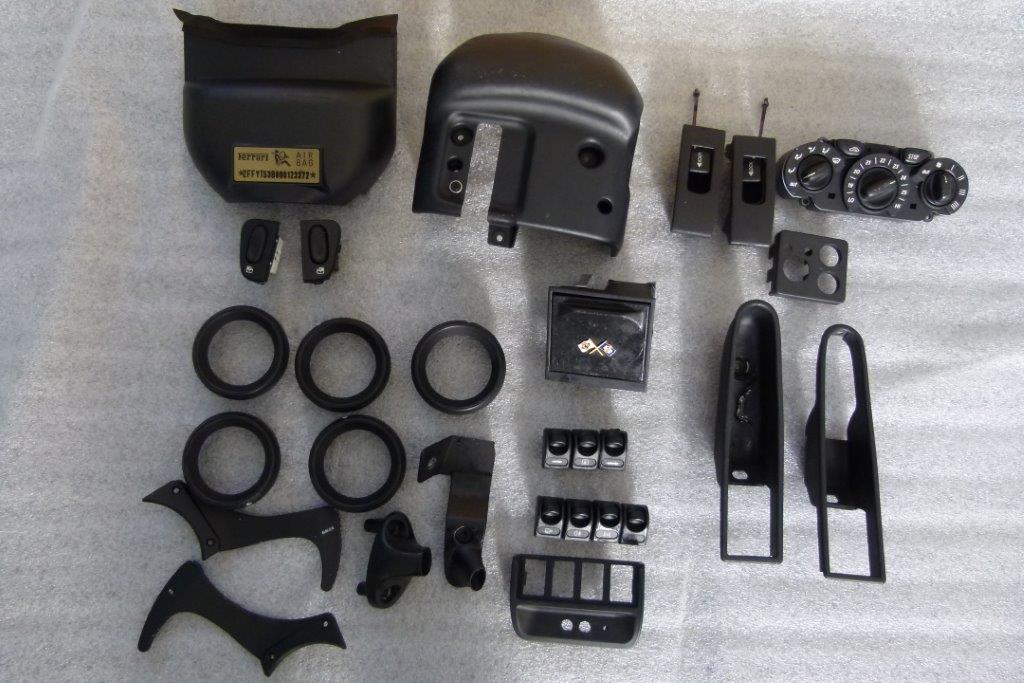